Beamish’s collections team see a lot of hair-care products come through the door, but it’s not often that a hairdryer arrives complete with box and a wide range of accessories! 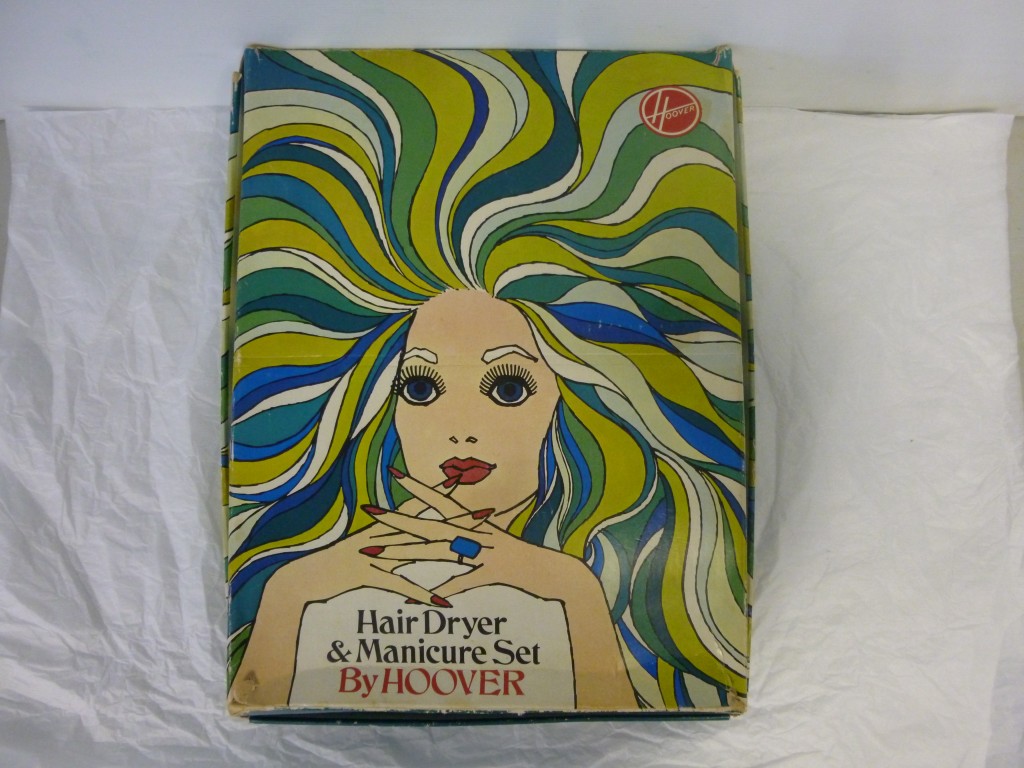 This 1970s Hoover Hair Dryer & Manicure set used one power unit to dry the user’s hair while simultaneously offering a nail manicure (the unit even had a shoulder strap for drying on the move! – well, within range of a plug anyway…) 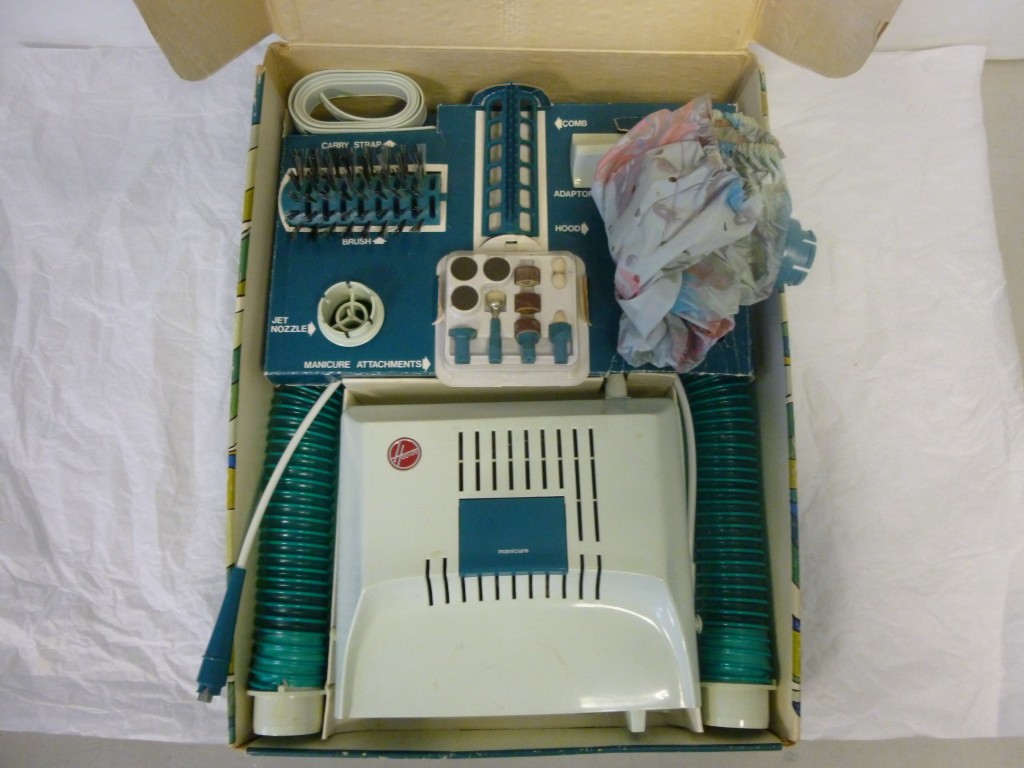 Today is the last opportunity to take part in the vote for which of nine publicly-nominated local 1950s semi-detached houses will be replicated at Beamish
(http://www.beamish.org.uk/vote-for-a-1950s-semi!/)
and to mark this occasion the Collections team would like to share a few gems from the museum’s photograph archive showing development of new housing in the Durham area in the 1940s/1950s. These images have been taken from the former Durham Advertiser collection. 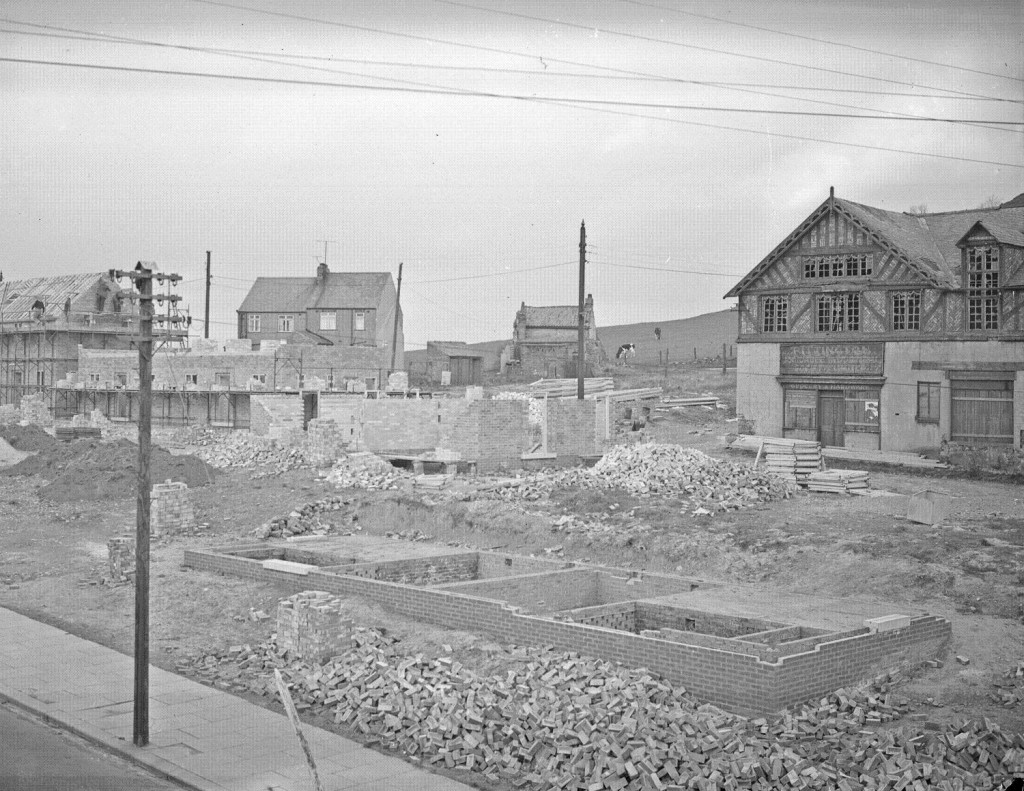 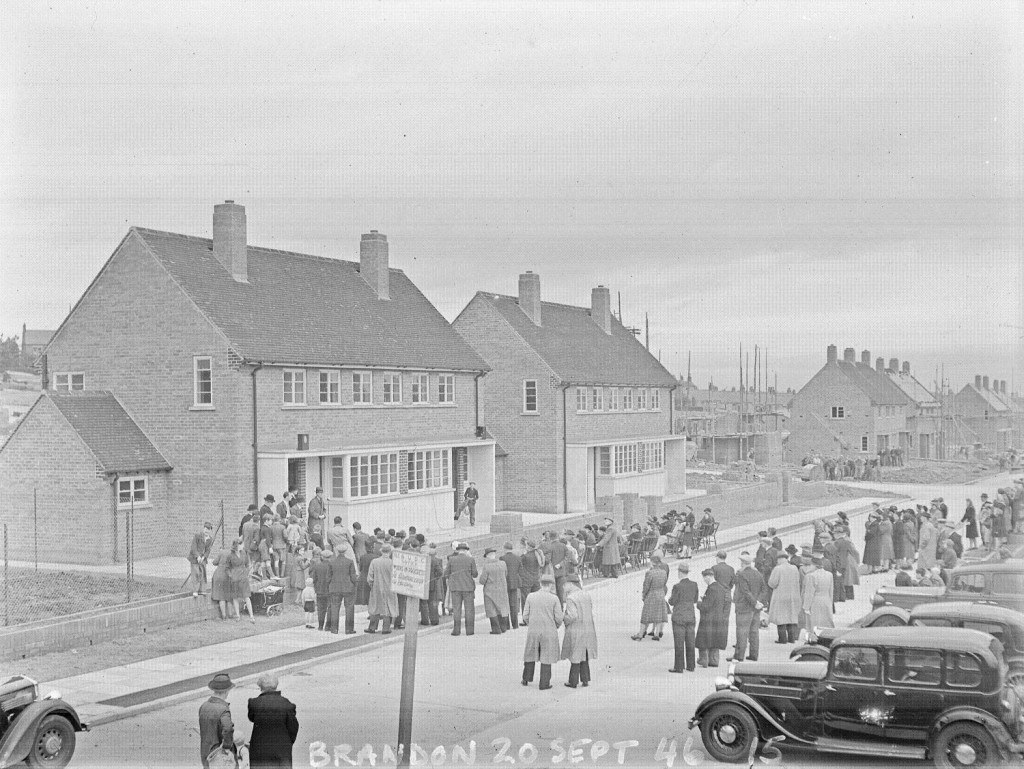 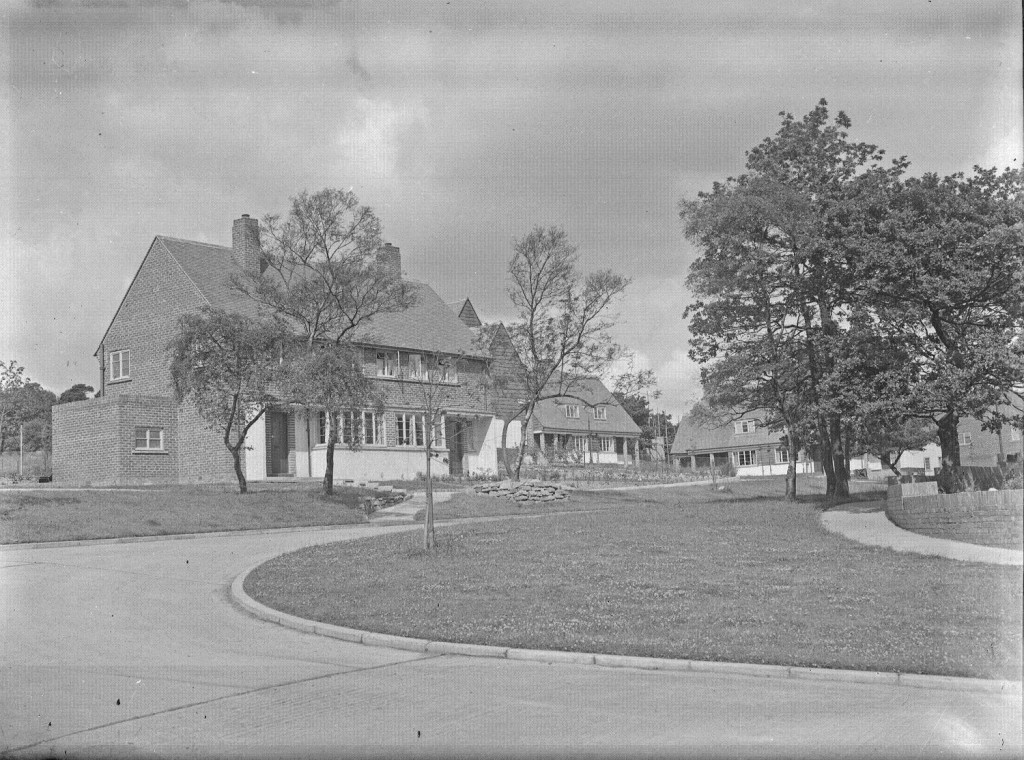 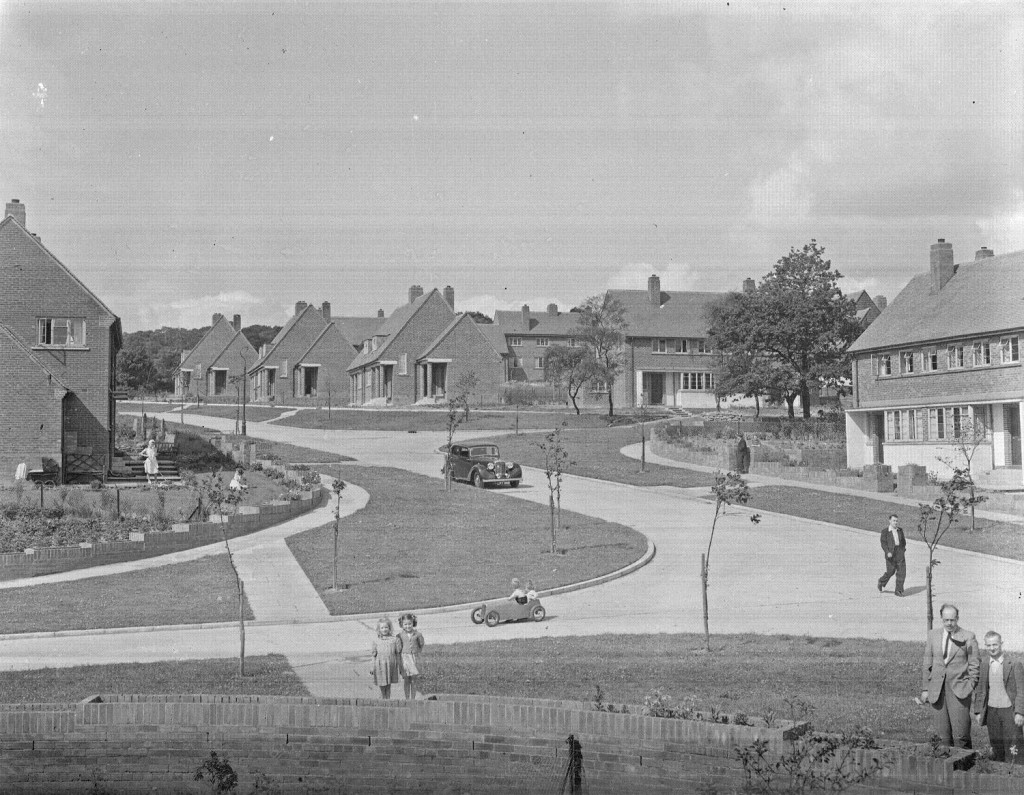 67542 – General view of new houses in a housing estate at Esh Winning. Note children in the foreground playing with a pedal car. 4th August 1950. 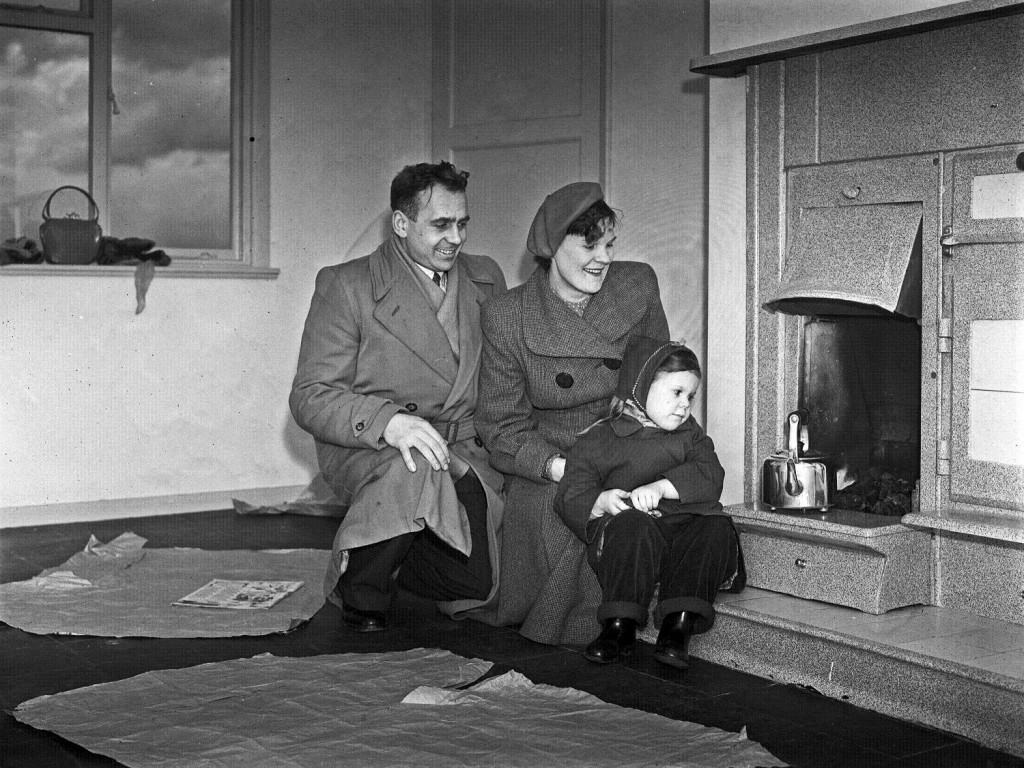 67663 – Mother father and child sitting beside a fireplace in a new house on Kirk Merrington Housing Estate, 6th February 1953.

It’s been a while since we looked at Beamish’s ever-expanding ephemera collection, so here’s just one highlight from what has arrived at the museum this week. 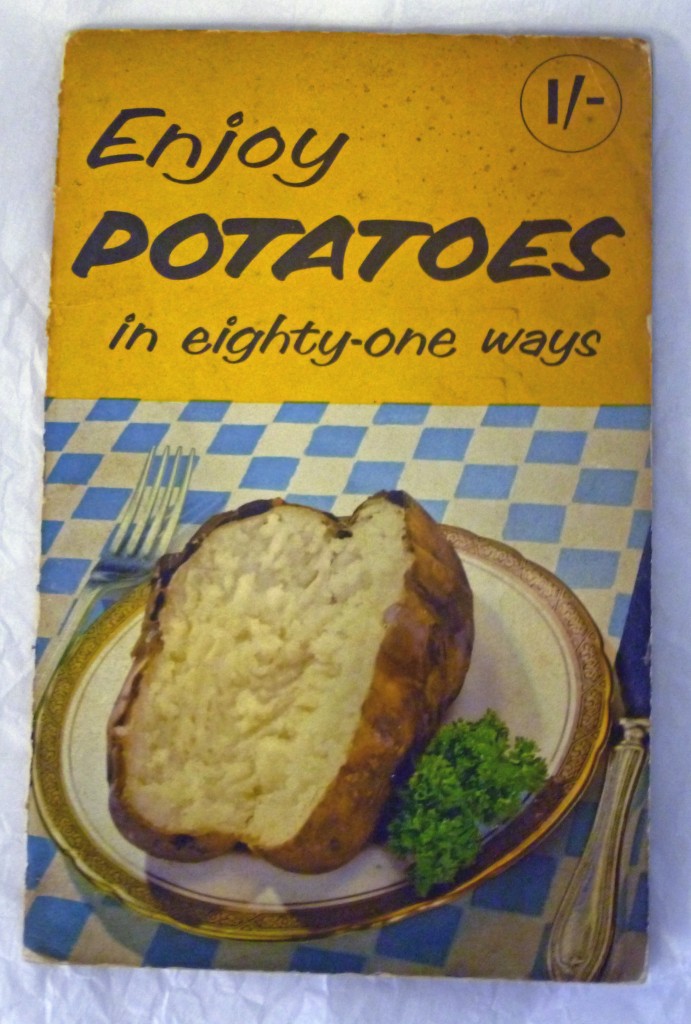 ‘Enjoy Potatoes in eighty-one ways’ was published in the 1950s by the Potato Marketing Board, presumably to take advantage of potatoes being a plentiful food source in the post-war austerity era. As the title suggests the booklet contains over 80 different food recipes involving potatoes ranging from the obvious (baked potato) to the slightly-less obvious (potato omelet), and the rather bizarre (potato gingerbread). 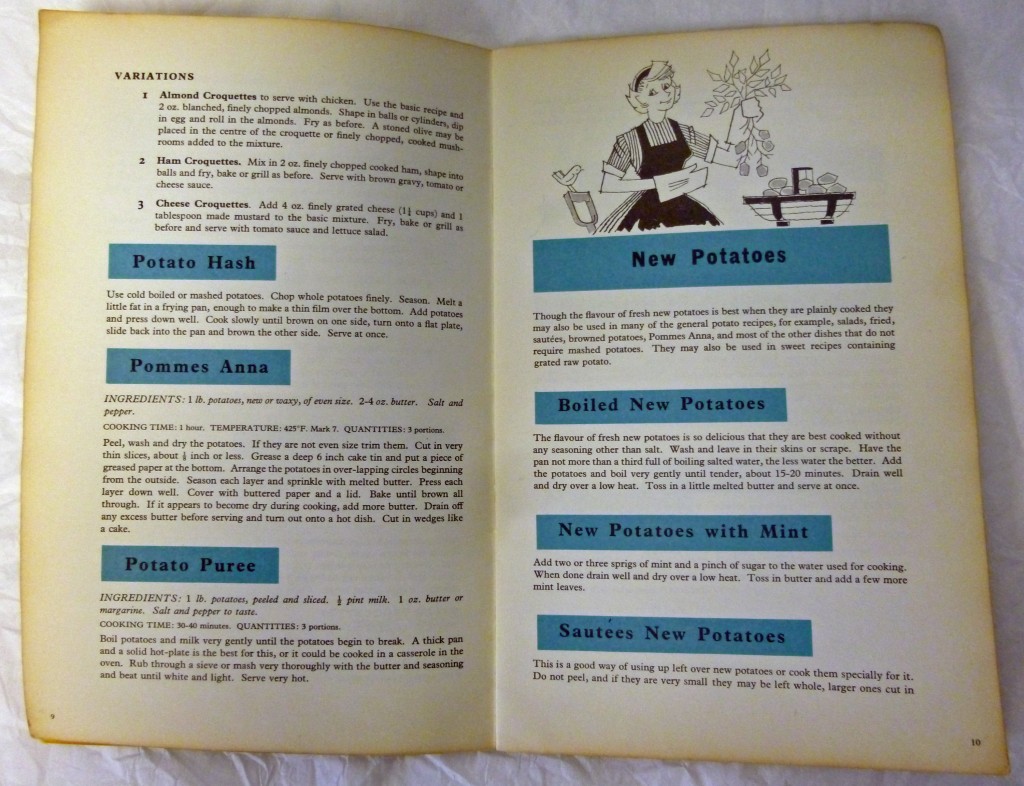 The beauty of working in an open-air museum is that hopefully we’ll be able to try many of these recipes out as the 1950s town develops. In the meantime if anyone can think of more than eighty-one things you can do with a potato, please let us know…

To reflect the fact that 1) the weather is getting better and 2) we’re all good and ready for the weekend, here are a couple of choice photographs of a Girl Guide troop enjoying a weekend camp at Pockerley Farm in 1959. Pockerley Farm is of course better known these days as Beamish’s Georgian Hall! 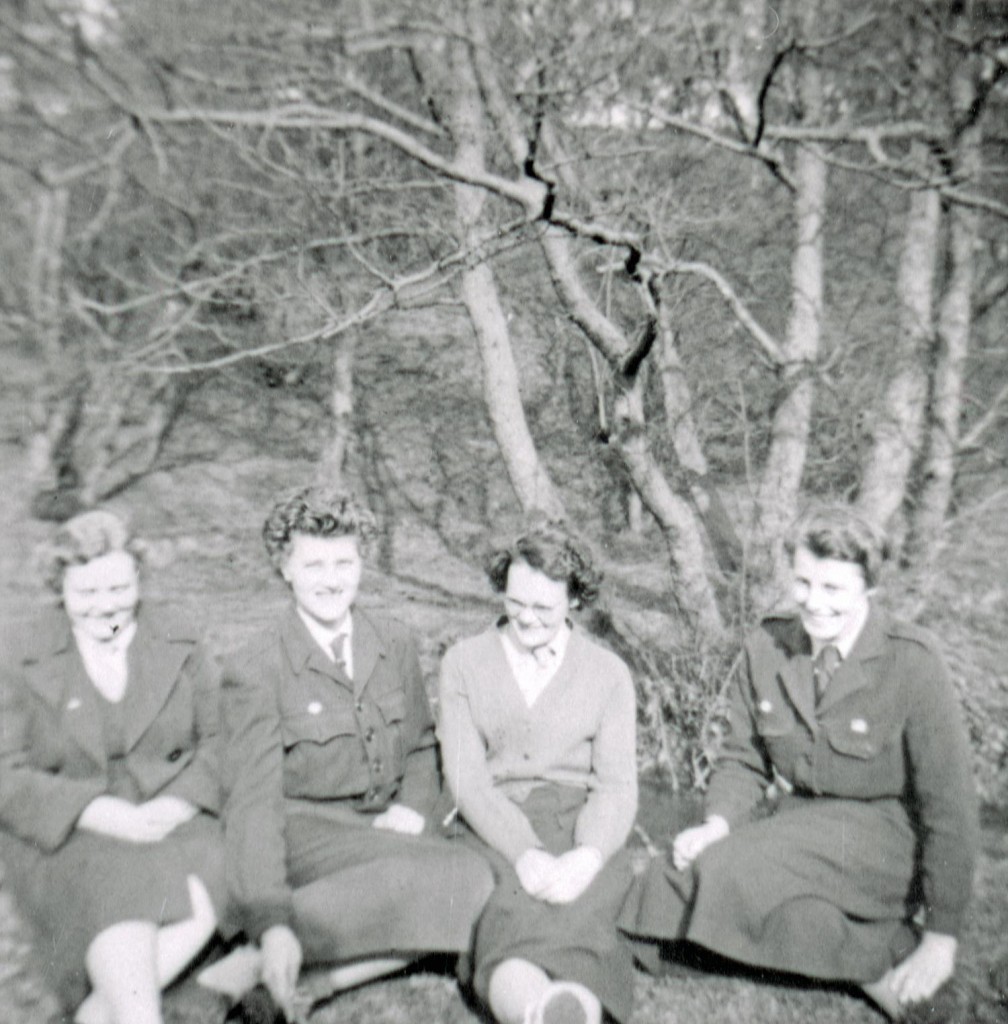 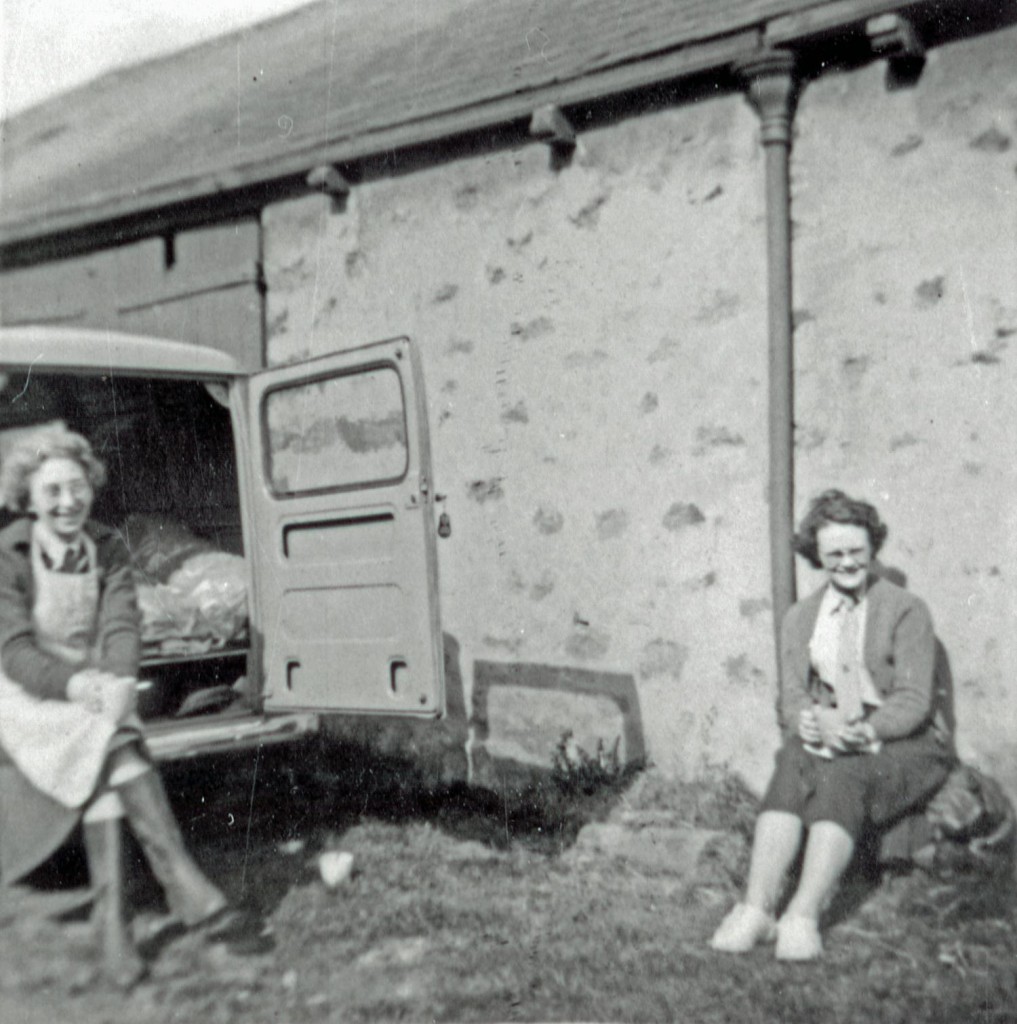 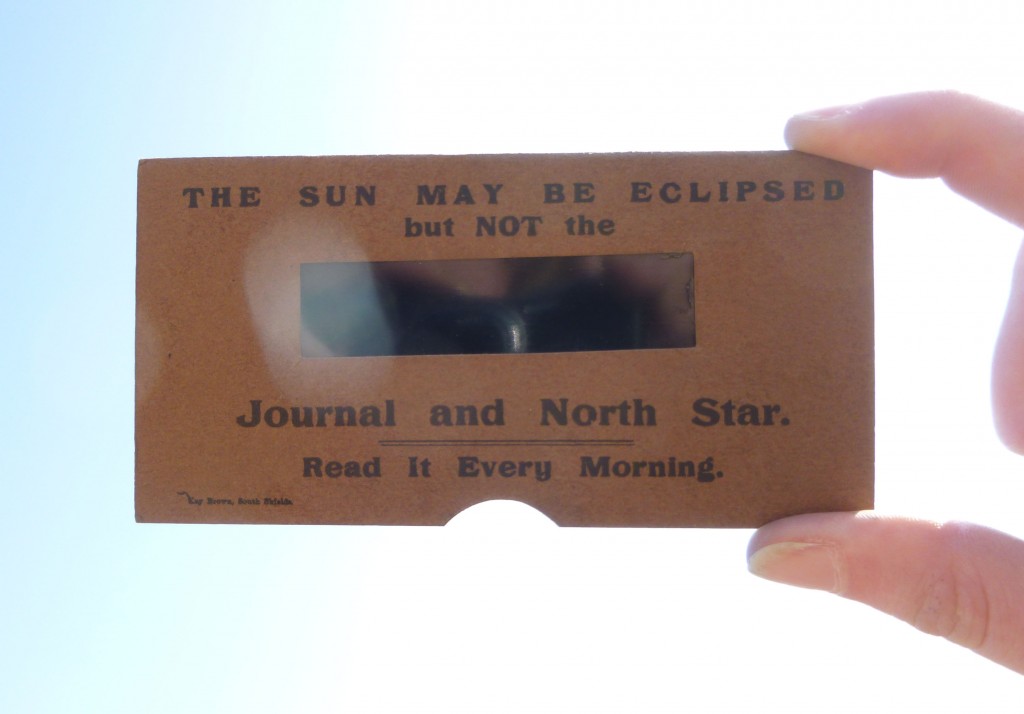 To mark the solar eclipse tomorrow (20th March), the busy Beamish collections team have found this gem produced for a similar eclipse on Wednesday 29th June 1927. This ‘Ecliptoglass’ sun shield has been very carefully protected in our stores (or every now and then it’d fall apart), and was issued by the Journal and North Star newspaper.  The user would hold the dark celluloid strip up to their bright eyes to ‘safely’ view the eclipse, though when we think about the damage that could do to your sight we get a little bit terrified… 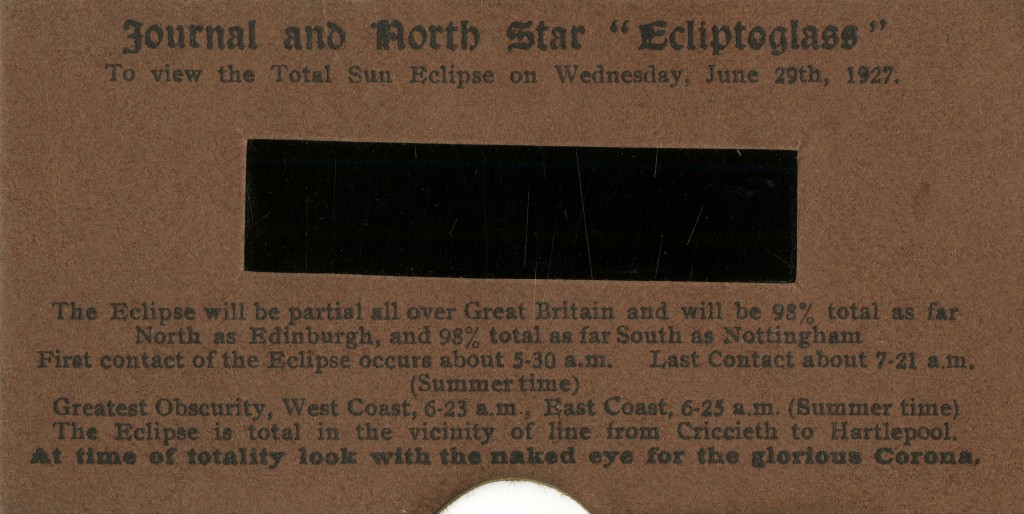 Sadly we won’t be able to use the ‘Ecliptoglass’ tomorrow as there really is no safe way to look directly at an eclipse, but it’s certainly an interesting example of a newspaper not missing an opportunity for self-promotion! 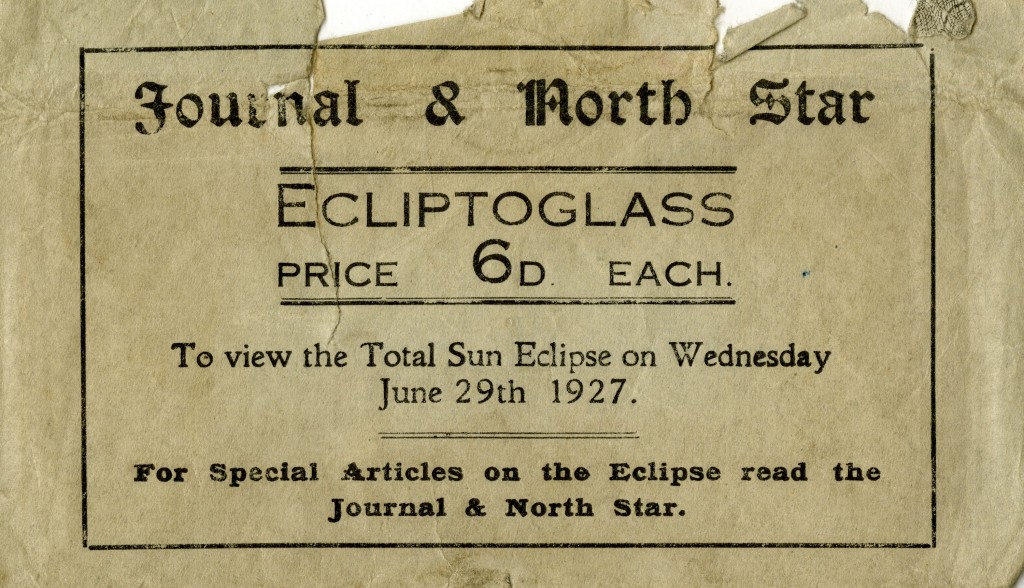 As it is Friday 13th March we thought we would share one of the historic superstitions we have here in the Beamish collections, a witch or hag stone. 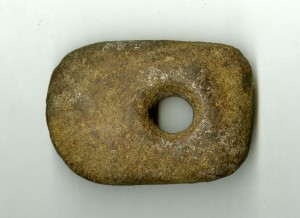 These stones were found in fields or often by the river or sea with natural holes formed in them, so they are quite rare. They would traditionally have been hung on a piece of strong threaded through the hole. Such stones were considered a most effective defence against witch-craft, they were often found  hung inside the door of cottages or in cow byres. For cottagers in the 1800s their cow was their most valuable possession and so were fiercely protected as they were thought to be particularly susceptible to the evil influence of witch-craft. In rural communities of the North these were still frequently used through the early 1900s.

When a cow was considered to have been ‘witched’ it was customary to put salt on her back. If this didn’t work the cow would be sold to a neighbour with the money being passed literary over the cow’s back. Apparently this invariably cured the problem!

We’ve a couple of interesting photographs from the museum’s own past to share today – hard to remember sometimes that we’ve been at the Beamish site for nearly 45 years, and the collection itself was started over half a century ago! 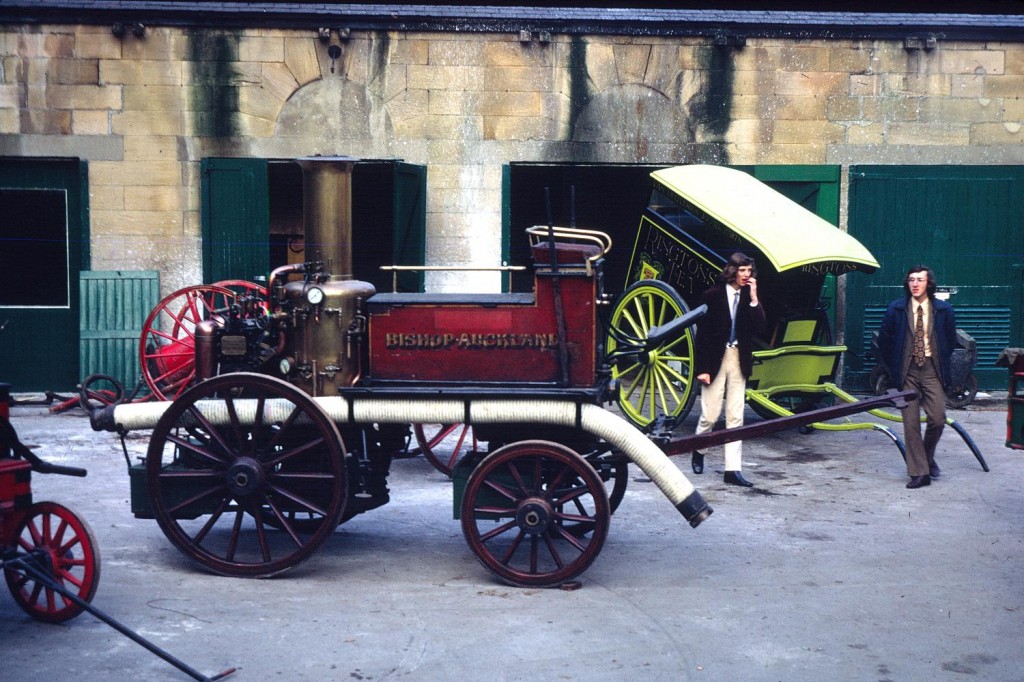 Before the Regional Resource Centre was built in 2000 the museum’s offices and object stores were a little way down the road at Beamish Hall, the stable block of which was used as a vehicle store. At an evening event for the Friends’ group in June 1972 the Bishop Auckland horse drawn fire engine and Ringtons Tea Van are seen posed in the stable yard (now the outdoor seating area for the Beamish Hall hotel restaurant!)
182782
Photo Taken by Durham University Industrial Archaeology Group on Foulbridge Project 1971 -72 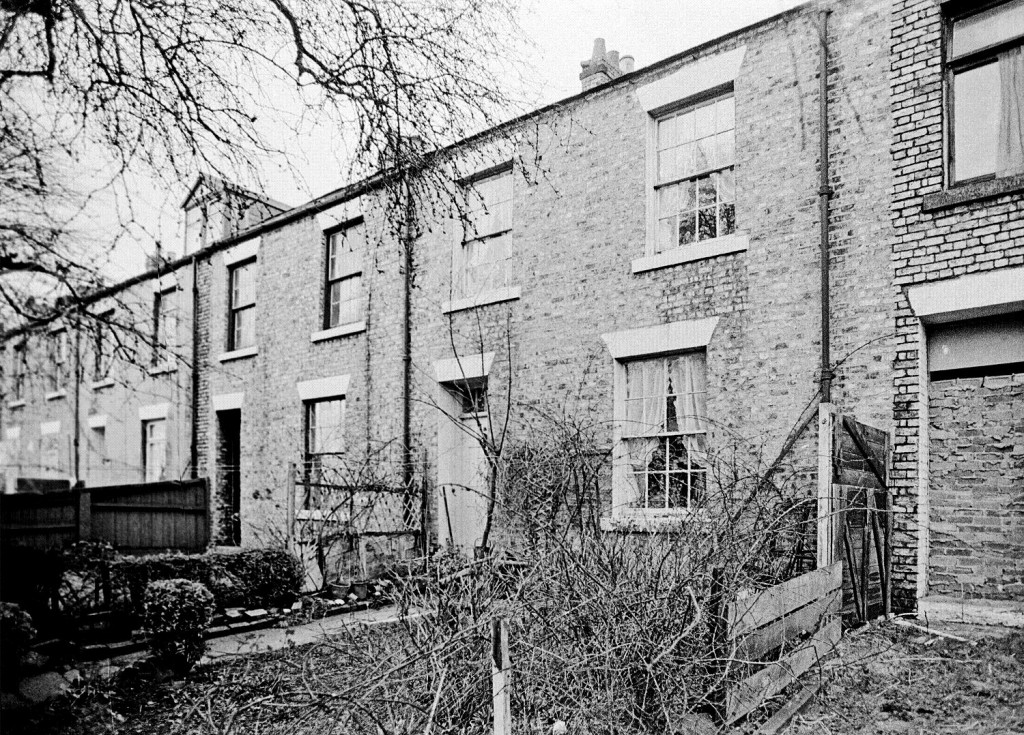 Familiar yet unfamiliar! This is Ravensworth Terrace, now a highlight of our Edwardian Town, but this unusual view is of the street in its original location in Bensham Gateshead before the terrace was dismantled and six houses moved and re-erected at the museum.
65098

That’s right, paws for a minute and prebear for an onslaught of bear puns. As usual we’ve had a large assortment of objects being donated this week – everything from a seal (not bear) press from Consett Building Society to a lovely set of 1950s kitchen units, but I don’t think anyone was expecting this chap to turn up! 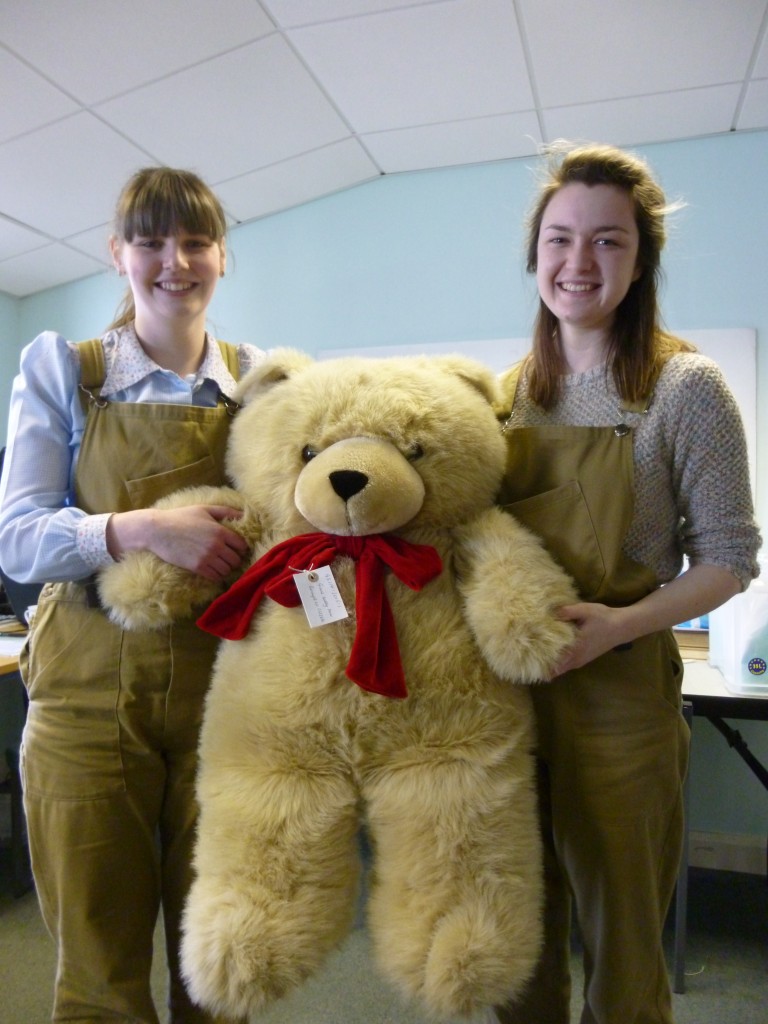 This enormous 1980s Teddy Bear, seen here with Rachael and Lydia, two of our dedicated band of 20th Century Collectors, is rapidly becoming the team mascot – we can’t bear to put him in the stores so we might leave a shelf bear and keep him in the office so he can bear witness to all the curatorial goings on . Sorry, these bear puns are pretty grizzly…