Having expereienced an Edwardian and a Victorian Christmas, the final Beamish festive tradition is the Georgian Twelfth Night at Pockerley Old Hall.

The Christmas season in the Georgian era, was still based on the Twelfth Night festival running from Christmas eve to the twelfth day after. It was a season of entertainment, delightful excitment and merry-making. The early 1800s witnessed a revival of Christmas with a focus on the nostalgia for ancient customs brought to the public in engravings, articles and even books depicting Christmas of the ‘olden days’. Key to this was the adaptation of medieval festivities to ‘modern’ tastes. There was wistfulness for the ‘hospitality’ of feudal society.

In the late 18th century to early 19th century Twelfth Night celebrations were at the height of their popularity. Twelfth Night celebrations were based on the Medieval tradition of disguise, elaborate display and role reversal led by an elected master of ceremonies. The King and Queen who led proceedings could be selected through finding a dried bean and pea in the special Twelfth Night Cake, over time this devolved to picking characters from a hat. There were a number of different characters include ‘typical’ ones such as a gypsy and a flirtatious woman, little Jack Horner, Tom Thumb, Goody Twoshoes, Johnny Bo-peep, pilgrim, Turk, Jew, Jewess, witch, flower girl, fruit girl, hay maker, harlequin, clown and cupid. Who would you like to be? 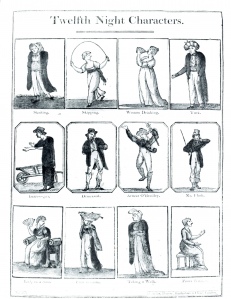 The Georgians also held a number of interesting beliefs around the Yule log, the tradition had continued mainly unchanged for 100s of years. Georgian superstitions include it to be bad luck if a squinting person entered the house while the log was still burning, or a bare footed person or even a flat footed person! Some households also burned a Yule or Christmas Candle, if a Yule log was not an option. This candle was kept burning through the whole of the Twelfth Night season. The Christmas candle could be in the window, or consist of two large candles on the table or buffet wreathed in greens.

Records from Northumberland describe evenings of cards, singing and dancing through the festive season. Some families even hired in a piano for the singing and dancing. It was a time for the extended family to get together. Different amusements took place each evening. Typical card games included whist and commerce, board games such as drafts, chess and backgammon were also played. Popular games included Snap Dragon, this was popular from the 16th century right through to the 19th century. To play the game brandy was heated and placed in a wide shallow bowl, raisins were placed in brandy that was then set alight. The aim of the game was to pick out the raisins from the burning brandy and eat them without getting burnt. Don’t try this at home children!

The Christmas holidays lasted longer, this is because the journey to visit the family took so long and in some cases guests did not want to leave. This often stressed the cook and housewife, especially with the varied and full menu that guests expected and the added pressure of possibly have snowbound guests. With no xbox or TV to watch it was up to the mistress of the house to make sure her guests were properly entertained.

It was not unusual for farming families to put on plays in the barn, with the younger extended family taking all the parts, inviting all the neighbours and staff to watch the spectacle. It was customary for boys and girls to sing ‘carols’ door to door in return for small presents. Sword dancers still came around visiting with a Bessy (a man dressed as a woman) and a Fool. Charades was another popular Christmas activity. There were two ways to play the game, one was a relaxed parlour game, everyone was seated and each player in turn would recite a conundrum and the rest would have to guess the word. The other way was to split the party into two or more groups and once the word was decided upon the group would create short one minute acts to describe syllables. When you visit Pockerley Old Hall during the Christmas season why not have a go at the games in the Parlour.

This is an original early 1800s charade:

And my second confines her to finish the piece,

How hard is her fate! But how great is her merit,

If by taking my all she effects her release!

During the festivities every family that can afford it had goose pies, minced pies and ale. The special festive food was kept on a sideboard through the whole of the season. Some of the items could be difficult to source in the middle of winter, such as butter and the poor weather made it difficult for those living outside of towns to travel to collect supplies. Some items were specially preserved to be brought out at the diner party such as brawn which was soused in early November so that it could be kept right through the festive season and served to all guests. Mutton was frequently pride of place unless the family had enough parkland for deer. Turkey was available but not popular as a Christmas dish at this time. Goose was popular though not at Christmas, it was mainly eaten at Michaelmas in September during goose fairs. It was believed that a goose eaten at Michaelmas would bring good luck financially for the year as the Yorkshire sayg ‘He’at eateth goose Michelmas won’t find his pockets short of brass’

It was during the reign of King George III (1760-1820) that Christmas pudding first appeared in the format we recognise today. Some believe it was invented especially for him by his chef because of his excessive love of English puddings. Before this point similar ingredients were cooked as a sloppy pottage or porridge in a cloth. Puddings of all kinds were popular dishes during the festive season. They were easy to prepare and could cheaply fill many stomach of unexpected guests right up to Twelfth Night, such as rice pudding and apple dumplings.

There are records of the ‘yule baby’ being made of the sweat meat given to children to commemorate the nativity still in the early 1800s in Northumberland, a tradition that had died out around the rest of the country. Gifts were given as a token of regard and ‘good cheer’. The Christmas box was still being given out to servants and children as a reward for good behaviour. These boxes often contained money. Gifts were also given on 6th December to commemorate St Nicholas, separate to the Twelfth Night or New Year gift giving which was accompanied with a poem. Charity was given to the poor, it was often worsted stockings, shifts and shawls, sometimes these were made by the ladies of the house. It was traditional for the poor to visit the clergy, well-off and squire for seasonable charitable gifts such meat and corn.

Houses were decorated with greenery, not a huge amount, but ivy, holly, laurel and bay, in addition to mistletoe. Gentlemen were seen with Christmas greens in their buttonholes. It was hung from the ceilings in bunches, tucked behind items on the wall or the clock and even laid in the windows. Family portraits were decorated particularly with ivy and holly. If you visit Pockerley Old Hall during the Beamish Christmas season you will see the types of decorations they used.