Recently donated to the museum was this very cute and very special little horse, Bronco, owned by the donor since she was a child. Since ‘tweeting’ the arrival of our new friend a flurry of messages from other Bronco owners demonstrated the toy’s popularity, charm and the obvious nostalgia it creates. It soon became apparent after delving into the history of this toy horse that it was part of a popular British-made toy company who developed a range of ‘Mobo’ toys, including Bronco. 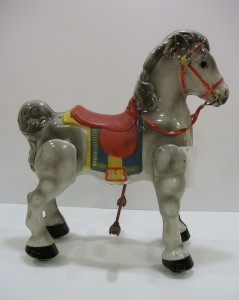 Bronco, the toy horse was made of steel and painted white and grey, with a red and gold saddle, stirrup and reins and black mane and tail. The iconic label of the company, a clown in a yellow circle, was stamped onto the toys. 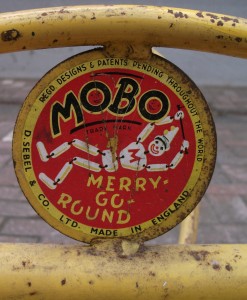 The Mobo logo is broadly the same on each toy.

The toy manufacturer D. Sebel & Co. Ltd, who made Mobo toys, was based in Kent where they produced toys from 1947 up until 1972 when cheaper products abroad out-produced those made by the British company1 2.

However, proceeding the company’s focus on toy production, the founder David Sebel originally established himself as a wheelwright in 1921, in London (after emigrating from Russia), before gradually expanding the business along with his son, Harry, to produce metalwork for commercial markets. During WWII, D. Sebel & Co. produced metal parts for tanks and aircraft and for buildings including towers and bridges. It was after the war that the company expanded further into furniture-making and then in 1947 into toy-making1. Mobo toys were finally born.

Although the company specialised in metalwork, plastics were adopted in toy production in the 1960s. It has been suggested1 that pressed metal was the bridge linking the development of wooden and plastic-made toys.

America became a strong market for Mobo toys where the sister company Sebel Products Inc. was established. However, similar toys also started to appear that were produced by other companies, including Marvel the Galloping mustang created by the Louis Marx Company3. Australia was another focus for D. Sebel & Co., and in 1951 they established their toy and furniture company in Bankstown, New South Wales. Furniture became the main focus for the company, even though the toys were quite popular. Interestingly, today, GWA International Group owns this company1 – and so in a way, the efforts of D. Sebel & Co. still live on. 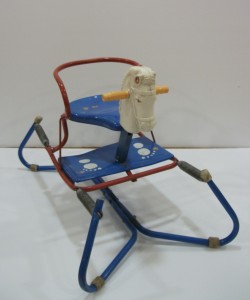 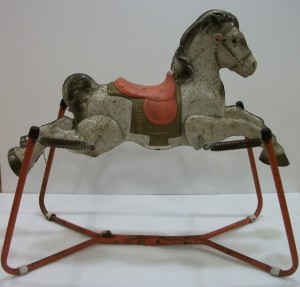 The Bronco horse was one of the most popular of their creations and could be ridden and moved by pushing down on pedals which in turn moved the horse’s legs backwards and forwards. In 1950 the company developed ‘Magic Steering’ enabling the horse to change direction by using each pedal independently. The colour of our Bronco appears to be the most common, but apparently other colours were also introduced by Sebel, including black horses with gold and red saddles, and brown horses with tartan saddles1.

Other ride-on toys were also produced by Mobo, including the ‘Walking Snail’2, ‘Mobo Ponies’ and the ‘Pony Express’ as well as bicycles, swings, scooters and peddle cars. 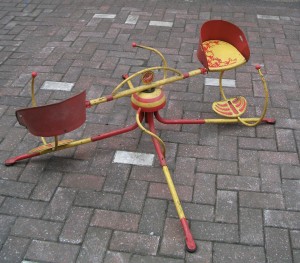 We put this Merry-Go-Round back together and it still works nicely – although sadly we are too large to play on it.

Within our collections here at the museum we have a few other Mobo toys, including a Prairie King spring horse, small child’s rocking horse, and Merry-go-Round (all pictured).

It would be interesting to know if anyone remembers owning or still has any of these other Mobo toys or a different coloured Bronco!